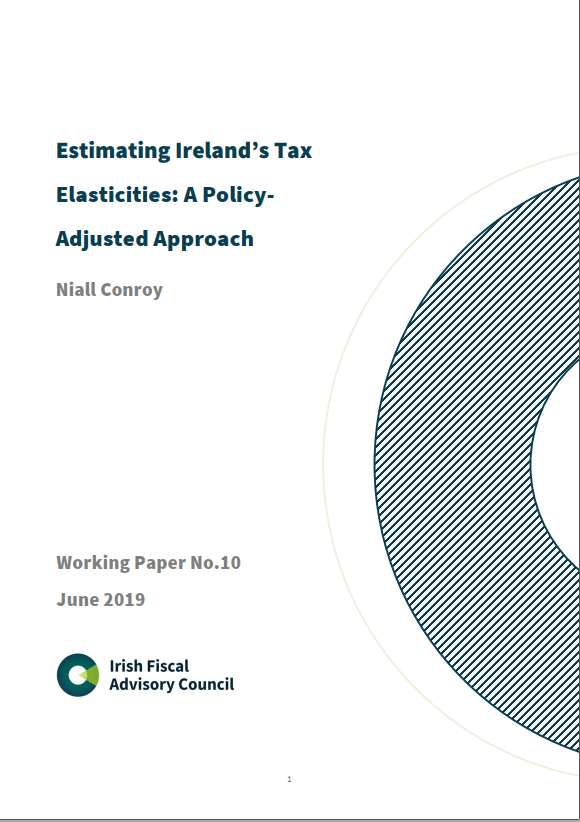 What are tax elasticities?

Tax elasticities describe the relationship between tax revenue collected and the tax base. For example, the amount of income tax collected is related to the amount of taxable income earned in the economy. Tax elasticities are important for forecasting tax revenue and for estimating the costs/yields of changing tax policy. They can also provide insight as to the progressivity of different tax headings.

How are they estimated?

The amount of revenue collected is driven by two main factors, the macroeconomic driver and taxation policy. The elasticity of tax revenue focuses on the impact of the macroeconomic environment alone on receipts, with tax policy held constant.

Up until now, empirical estimates of Irish tax elasticities have been estimated by examining changes in revenue collected and the macroeconomic driver. This fails to take account of changes in policy which have occurred over time, which would impact on revenue collected. These policy changes have been frequent and substantial in many cases, which can bias estimates of the elasticities.

This paper is the first which estimates tax elasticities in Ireland after accounting for policy changes. We are able to do this as we compile a new dataset of tax policy changes. This allows us to estimate what revenue would have been collected over time had tax policy remained unchanged. Using this “policy-adjusted” measure of revenue, we can estimate the elasticity of different revenue headings more precisely.

What are the results?