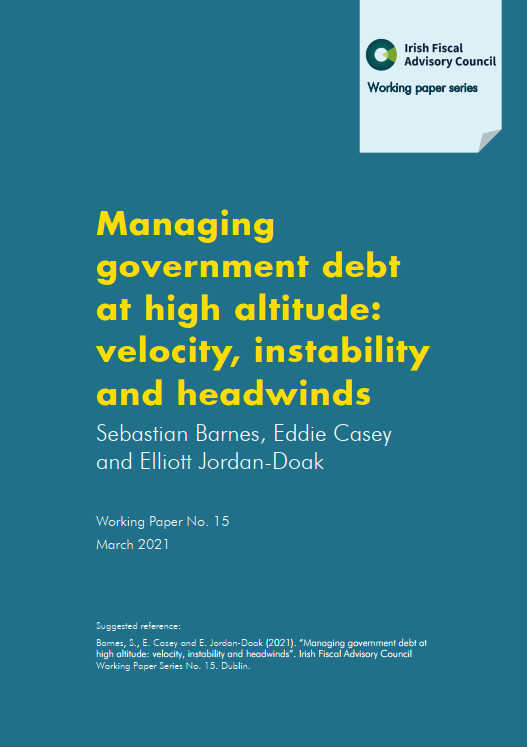 In this paper, we explore the debt dynamics associated with current conditions of low interest rates—lower than growth rates—and high debt ratios. We look at some of the implications for Ireland and selected OECD economies.[1]

What are the economic conditions we assess in the paper?

The Global Financial Crisis and Covid-19 pandemic led to governments accumulating record levels of public debt. This comes against a backdrop of long-run declines in growth, unprecedented support from central banks, and dramatic falls in interest rates. This has seen the difference between interest rates charged on government borrowings and economic growth rates largely turn negative, with interest rates falling below growth rates. This is likely to mean that they will remain favourable for debt reduction for some time.

What does this mean for government debt ratios in future?

While debt ratios are likely to be high coming out of this latest crisis, we make three arguments.

What should policymakers do?

Taken together, the analysis in this paper suggests that the additional fiscal space created by favourable debt dynamics can be used to address the Covid-19 crisis and to take measures to boost potential output, such as higher investment. However, this space should be used cautiously, given the heightened risks at high altitudes of debt and the headwinds posed by population ageing.

While governments can use additional fiscal space and benefit from swift declines in debt ratios due to favourable dynamics, a credible medium-term plan for fiscal policy is needed. This should anchor the debt ratio over the medium term by identifying a realistic path for spending and taxation that delivers this. The path should allow space for adjustment if conditions deteriorate, which would be prudent. This would include ultimately aiming for a primary balance that is sufficient to maintain the debt ratio on a downward path.