This Note on the Proposed Rainy Day Fund has been prepared by the Irish Fiscal Advisory Council for the consideration of the Committee on Budgetary Oversight. 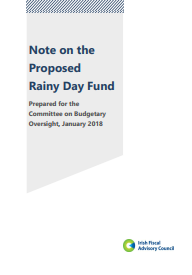 While not a necessity, a Rainy Day Fund (RDF) could play a useful role in running countercyclical policy in Ireland. The fiscal rules cannot entirely be relied upon to guide fiscal policy in an appropriately countercyclical direction. An additional tool, such as an RDF, may be useful to set savings aside in good times providing room for fiscal stimulus when needed. Another potential benefit of an RDF is that it could be used to save potentially transient revenue sources (e.g., unexpected surges in corporation tax receipts) rather than using these to fund permanent expenditure increases. An RDF could also improve liquidity, although the NTMA mitigates this risk through pre‑funding.

The proposed size of the RDF is small and the design is not countercyclical. Contributions to and withdrawals from an RDF should be linked to the economic cycle and should not be capped or timelimited. Given the open and volatile nature of the Irish economy, an RDF may need to be relatively large. With this in mind, the proposed fund looks quite small (€1.5bn is equivalent to 0.5 per cent of GDP or 2 per cent of total government revenue). Annual contributions in excess of €500m could be required to cool a rapidly growing economy.

How the fund interacts with the fiscal rules requires further consideration. Existing exemptions under the rules are very unlikely to provide the required flexibility to ensure withdrawals from the fund in bad times without causing breaches of domestic and European rules. Rather than relying on exemptions or one-off clauses currently available under the fiscal rules, a change to the rules to accommodate the use of such a fund is warranted.