This new Working Paper explores a number of ways to estimate an output gap that is relevant for Irish fiscal policy. 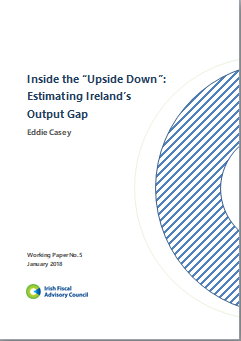 What is the “output gap”?

The output gap is a single measure that describes the difference between the economy’s “actual output” and its “potential output”. Potential output is the level of output that would be expected if the economy were at its most efficient — that is, at full capacity.

Why does it matter?

To understand whether a government’s current budgetary stance is sustainable, we need to have a sense of where the economy is in the cycle, and how much the economy could potentially grow over the medium term. For example, when an economy’s actual output is greater than its potential output (with a positive output gap), we would expect the government to take in more revenue and to face less cyclical expenditure on areas like unemployment benefits than it would when in its steady state (with a zero output gap). It is also important to have a medium-term view as to sustainable economic growth prospects when a government is determining its spending plans and to be able to assess the sustainability of government debt.

How is it measured?

Experts do not agree that there is one single method for best measuring the “output gap”, and so this paper looks at many different ways to measure it. Identifying the cycle and imbalances in the economy is difficult and subject to a lot of uncertainty. It therefore warrants a broader economic assessment to help understand cyclical developments.