The Government is expected to run a large budget deficit in 2020 amounting to €21.6 billion (equivalent to 10.7 per cent of modified GNI*).

There are risks that health spending will overrun, which could be masked by an overperformance in corporation tax receipts again as has happened in recent years.

In 2021, revenues are set remain weak and continued strong supports are expected, hence reducing the deficit only slightly to €20.5 billion (or just under 10 per cent of GNI*).

High spending will remain the key driver of the deficit

A large gap between government spending and government revenue opened up in 2020 amid the costs of the pandemic.

This reflects a substantial increase in spending on health, income and business supports associated with the impact of the pandemic. Revenues have fallen amid weaker economic activity.

Budget 2021 shows that the gap should close somewhat next year. Spending would be lower again for 2021 should contingencies set aside for a no-deal Brexit and risks associated with Covid-19 not be utilised.

The Government debt ratio has reached a very high level

Ireland’s Government debt burden was high going into this crisis and is set to increase sharply.

The Budget is based on a modest recovery

The official forecasts suggest a modest recovery in the Irish economy.

This is evident in official forecasts for the unemployment rate, which—even with substantial wage subsidies—show it remaining close to 10 per cent by end-2021.

The outlook is based on the assumption that the UK leaves the EU in a disorderly fashion and that a vaccine for Covid-19 is not in widespread use in 2021. Upside risks could therefore materialise if a trade agreement is formed between the EU and the UK or if health risks and prospects for treatments and/or a vaccine improve.

The economy has suffered a deep contraction in 2020 due to the pandemic but has recovered to some extent.

However, the outlook is exceptionally uncertain. There are uncertainties associated with both Covid-19 and from Brexit. While Budget 2021 assumes that the EU and UK will not agree a trade deal by the end of this year, it is possible that an agreement could be formed.[1]

Economy well below its potential

Official estimates suggest that the Irish economy has fallen well short of its potential in 2020.[2]

This means that there are lots of unused resources in the economy and plenty of scope for activity to be boosted. Indeed, good economic management suggests that policy should act to support demand as restrictions are lifted and when unemployment remains high.

The estimates produced by the Department suggested that the economy would only recover to its potential between 2023 and 2024.

Substantial supports and stimulus have been introduced amid the pandemic

The Government has introduced sizeable fiscal supports and stimulus to lessen the adverse impacts that Covid-19 has on the economy and society.

Temporary and targeted budgetary supports should remain broadly in place to support vulnerable workers and businesses for as long as is needed, even if there may be scope to adapt them as circumstances evolve.

Budget 2021 sets out significant increases in “core” gross voted current spending for 2021. This recurring spending is unrelated to Covid-19 and Brexit.

The recurring spending increases include €1.8 billion in Health spending and €0.5 billion for Education plus Research, Innovation and Science areas.

There is little indication of how these increases will be financed on a sustainable basis after the immediate crisis has subsided and once the recovery has become well entrenched.

There is also a risk that some of the spending related to Covid-19 becomes more long-lasting than is currently planned.

This represents an increase of €580 million compared to spending in 2020 and is €6.3 billion higher than in 2012 when investment levels were at their lowest in recent decades.

Growth before and after the budget

The policy measures announced on budget day as part of Budget 2021 are estimated to boost growth in underlying domestic demand by almost 0.5 percentage points in 2020 and by 1 percentage point in 2021.

Key taxes are expected to remain weak in 2021

Income tax, VAT and Excise tax receipts are expected to remain relatively weak throughout 2021 as a result of the impact of the pandemic and an assumed hard Brexit.

This chart shows the tax heads seasonally adjusted and set relative to their January 2020 levels (set as equal to 100 for that month). It highlights the sharp fall in receipts as confinement measures took hold from March 2020 onwards, followed by the recovery in receipts as these measures were lifted.

Tax revenues are now very reliant on corporation tax receipts and are expected to reach a record of almost 21.7 per cent of tax revenue this year. The average for 1995-2019 was 13.8 per cent.

The strength of corporation tax receipts has been a key factor in terms of the overall resilience of tax receipts during the pandemic.

Budget 2021 forecasts suggest this reliance will remain, with corporation tax revenues expected to remain high at 21.5 per cent of tax revenue in 2021.

The Government plans to publish a medium-term recovery plan in spring 2021 that will set out its strategy for emerging from the crisis.

In the medium term, the Government will need to balance competing pressures. These include a weaker underlying budget position, the need to reduce public debt, rising ageing costs, reducing the overreliance on corporation tax, addressing climate change and meeting social objectives as set out in the Programme for Government, particularly around health and housing.

The Government deferred a planned pension age increase previously legislated for in 2021. The pension age was set to rise from 66 to 67. The Government will set up a Commission on Pensions to consider future changes to the pension system but has not set out a timeline.

An improved budgetary framework would help

Dealing with the challenges posed by Covid-19, an ageing population and climate change will require careful planning and monitoring 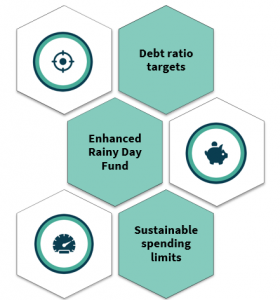 The Government has committed to producing a fiscal strategy in spring of next year. It is vital that further delays are not introduced.

The Council assesses that three key reforms to the fiscal framework would help to chart a prudent path for managing the public finances in coming years. These would include: debt ratio targets; an enhanced rainy day fund; and sustainable spending limits. Read more in our recent Pre-Budget 2021 Statement.

This release shows preliminary analysis of Budget 2021, which will be explored further as part of the Council’s next Fiscal Assessment Report (due out in November 2020).

[1] Note that these estimates are based on the Fiscal Council’s pre-Budget projections for real GNI*.

[2] The output gap shown is the Department of Finance’s preferred measure of the cyclical position of the economy.