This is the Council’s twentieth Fiscal Assessment Report. The report assesses the fiscal stance that the Government set out in SPU 2021. It assesses the Government’s macroeconomic and fiscal forecasts, and it monitors Ireland’s compliance with fiscal rules.

Response of the Minister for Finance to the Fiscal Assessment Report, May 2021

The economy is set to bounce-back as Covid restrictions ease. While the pandemic continues to have major impacts, the economy has proven more resilient to repeat waves. Short-term uncertainties have subsided. There is optimism that the rollout of multiple vaccines will lead to a sharp rebound in activity this year. 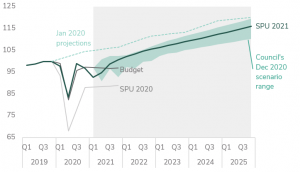 The Council assesses that the risks to growth are balanced. The Government’s official Stability Programme Update (SPU) forecasts assume a permanent loss, or “scarring”, of around 5 per cent of output due to the pandemic. Yet there is considerable upside potential to the Department’s relatively cautious assumptions. Better-performing sectors may be able to pick up the slack more quickly than is projected. In the short term, imports might offset growth less, and the unwinding of savings could significantly boost consumer spending. As a result, long-term scarring could be lower than is assumed. Against that, there are risks that virus mutations could necessitate further lockdowns, that international tax reforms would reduce foreign direct investment, and that Brexit‘s adverse impacts could be larger than assumed.

The Government forecasts a deficit of 8.4 per cent of modified Gross National Income (GNI*) in 2021, with its contingencies likely to be largely exhausted. Covid-related spending and sharp increases in core spending will see the Government run a large deficit this year once again. The €5.4 billion of contingency funding set out in Budget 2021 for this year looks likely to be fully utilised, mainly to cover extensions to income supports, such as the Pandemic Unemployment Payment and the wage subsidy scheme. 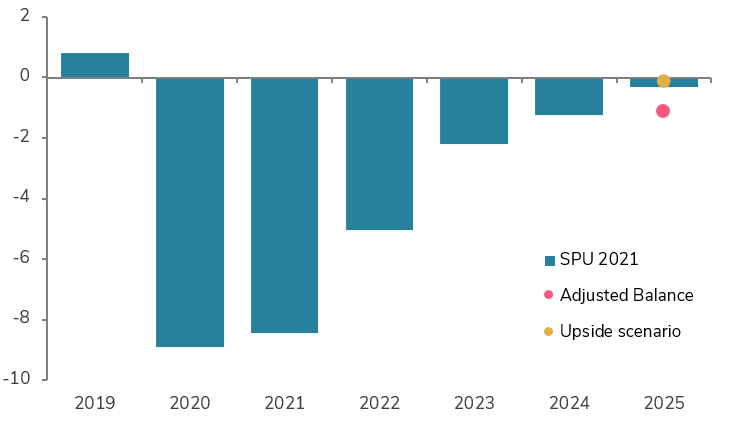 However, the Government’s medium-term forecasts are poorly founded. The SPU 2021 medium-term spending projections are based on technical assumptions that do not reflect the full cost of providing core spending commitments. They also show income tax receipts growing unrealistically fast relative to incomes. This is not consistent with the Programme for Government plans to index the tax system, which would reduce growth in income tax receipts. Furthermore, details about the costs of other policies, such as the implementation of Sláintecare’s major healthcare reforms, have not been provided beyond this year.

The Council assesses that a more coherent adjusted baseline would be for a deficit of over €3 billion or 1.2 per cent of GNI* in 2025 based on the SPU’s growth forecasts. The SPU projects a deficit of €0.8 billion or 0.3 per cent of GNI* for 2025. However, more realistic projections would suggest a larger deficit is probable. Yet an upside scenario would imply that the deficit could still close by 2025 under current policies.

The Government has been able to support the economy unlike in the past: boosting spending and other supports during the downturn. This approach may have halved the contraction in real GNI* in 2020. The Council assesses that the Government’s response in 2020 was prudent and necessary.

The Government’s decision to continue exceptional temporary supports in 2021 was appropriate, but large permanent increases were not prudent. Budget 2021 included substantial and permanent increases in spending amounting to at least €5.4 billion without long-term funding. This could be as high as almost €8 billion once non-Exchequer spending is considered. There continues to be little transparency about non-Exchequer areas of spending.

The Government is ramping up permanent spending in 2021
€ billion, policy spending 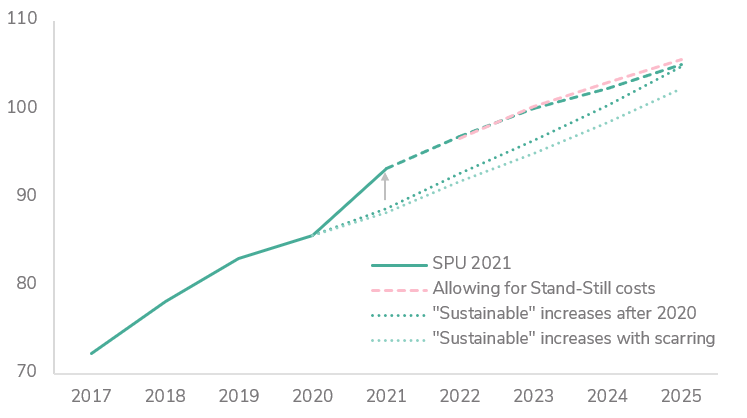 Ireland’s government debt burden was already high going into the Covid crisis. At the end of 2020, the net debt burden was equivalent to 91 per cent when set against an appropriate measure of national income like GNI*. This makes it one of the highest debt ratios in the OECD.

However, the State has large resources on hand and interest rates are low. While Ireland’s debt ratio is likely to be high coming out of the crisis, the debt ratio is made more sustainable by lower interest rates. In addition, the State is likely to have close to €20 billion in resources going into next year. This should help to alleviate funding pressures as further deficits are run in the coming years.

If the economy recovers strongly as anticipated, a large-scale, untargeted stimulus would not be needed. Instead, the Government should consider a more targeted approach, reducing supports in a gradual way, supporting those most affected and calibrating this based on how the recovery evolves.

In the coming years, current projections suggest that achieving a balanced budget by 2025 would leave no room to implement new policy measures without increasing taxes or reducing spending in other areas. Achieving a budget balance over the coming years would help to put debt on a downward path to more prudent levels. In the Council’s adjusted SPU 2021 projections, this would require modest fiscal adjustment in the years ahead. In a more optimistic scenario, adjustments would not be needed. But there is no room for additional commitments without offsetting tax or spending changes. The large permanent commitments made in Budget 2021 have already used up much of the space that a growing economy would generate.

Ireland’s net debt ratios are projected to fall steadily from high levels but there are risks. The net debt ratio is projected to be falling at a steady annual pace of close to 3 percentage points of GNI* by 2025. This would slow if spending rises more quickly without additional revenue-raising measures. Higher debt levels magnify the uncertainties for the debt path. New analysis in this report looks at debt sustainability through the lens of stochastic debt sustainability analysis as advocated by Blanchard, Leandro and Zettelmeyer (2021). The Council’s estimates suggest that there is a 15 to 20 per cent risk of Ireland’s debt ratio being on an unsustainable path by 2025 under the policies set out in the SPU. While this is not alarming, it suggests that the risks are non-negligible and it underlines the importance of reducing debt to more prudent levels.

The Government failed to deliver on its commitment to publish a credible medium-term strategy with SPU 2021. As well as being based on poorly founded medium-term spending forecasts, the SPU does not incorporate major policy commitments over the medium term. By continuing its current piecemeal approach towards developing real plans, the Government is not providing realistic or useful guidance.

The Government needs to set out a credible medium-term strategy; this is both essential and long overdue. The absence of realistic plans and any fiscal targets leaves the public finances unanchored. A risk is that overspending would lead to larger deficits or the use of corporation tax receipts to mask higher spending. Three initiatives would help to better anchor budget plans: credible debt targets, saving unexpected corporation tax receipts in the Rainy Day Fund, and setting spending limits based on realistic forecasts.

Ireland also faces long-term challenges, which will put further pressure on the public finances. These pressures include a rapidly ageing population and potentially costly adjustments to meet Ireland’s climate change targets, as well as policies outlined in the Programme for Government, which are likely to lead to higher spending.

The general escape clause and the exceptional circumstances clause gave leeway within the fiscal rules for a sizeable budgetary response to the public health emergency and the economic crisis both last year and into this year. While talks are ongoing on reforming the EU fiscal rules, the likely termination of the general escape clause at the European level by the end of 2022 reinforces the need for a clear medium-term strategy.

The Medium-term Expenditure Framework is not working. It has become clear in recent years that departmental expenditure ceilings are set, not with a view to controlling spending with realistic ceilings, but merely to comply with legal requirements. The ceilings do not reflect likely pressures from demographics, prices, and pay increases.